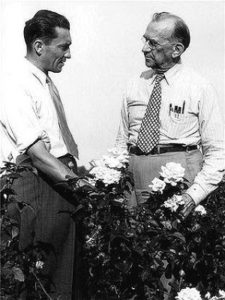 Peace. The other day when I was bringing in two of my Peace roses, I said to myself, ”I’ll bet not everyone knows her story.” In 1939, the breeder Francis Meilland found a sturdy plant with pale gold blossoms growing from one seed he had nurtured. He sent cuttings to Germany, Italy and the United States. The bundle of stems addressed to a Pennsylvania rose grower was aboard the last American plane that got out of France in November 1940, a step ahead of the invading Nazis. Five years later, after the war ended, many experts considered Peace the best rose ever developed, and within a decade Peace was blossoming in more than 30 million bushes throughout the world. How many more bushes of this hybrid tea rose are blooming now! 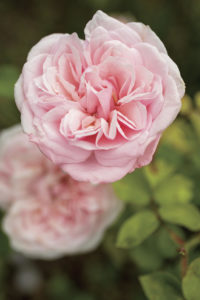 Souvenir de la Malmaison. “Bad house”? “Sick house”? Well, the edifice was constructed about 1400 as a leprosy hospital. At the beginning of the 17th century, a legal administrator in Paris had it turned into a chateau. It was further renovated later that century. In 1799, the Empress Josephine, Napoleon’s wife, bought it. She was the first person in Europe to collect roses systematically. The rose was originally called the “Queen of Beauty and Fragrance.” When the Grand Duke of Russia visited the garden in 1814, seeking specimens for the Imperial Garden in St. Petersburg, Josephine handed him a blossom, saying, “Voici un souvenir de la Malmaison.” Souvenir de la Malmaison is a Bourbon rose of palest pink with its petals in quarters around the flower. It is fragrant and blooms most of the summer.

Barbara Wittman Alsip was born and raised in San Antonio, Texas, of German, Austrian and Prussian grandparents. Her father was a horticulturist, (Texas A&M, Class of 1919), and her mother was active in garden clubs and flower growing. She has two grown sons and two grandsons.

She received her BA and MA in French and Spanish from Texas Christian University and her PhD in French from Emory University. She taught at the university level for a number of years.

At her first home in western Pennsylvania, she had 165 trees, evergreens, flowering trees, perennials, herbs and annuals. She is looking forward to landscaping, with Bedner’s direction and help, at her new home.

#bednersgrown
We started planting this week, and some of the fir

Trivia time! Flower petals, like seen here on this